Every year, TARC has the honor of recognizing those who have provided outstanding service and advocacy for Oklahomans with developmental disabilities.

Please take the time to nominate one or more individuals/organizations that you believe deserve to be recognized for their efforts in helping others. Winners for the 28th Annual TARC Advocacy Awards will be honored at the awards ceremony on Tuesday, Dec. 11 at the Marriot Hotel Southern Hills in Tulsa. 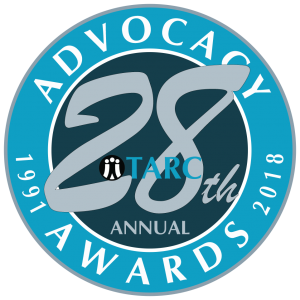 There are 13 categories in which nominees can be considered for an award.

Every recipient of the award categories listed below has done something remarkable in helping TARC achieve its mission of ensuring a high quality of life for Oklahomans with developmental disabilities and their families.

Anyone can nominate advocates for an award by scrolling down and following the link to the nomination form. Nominations are due by Oct.19.

TARC reserves the right to withhold an award in any category in which an insufficient number of qualified nominations are submitted. A selection committee composed of prominent Oklahoma advocates in the field of developmental disabilities will make the final decision on Advocacy Award winners.