Please join TARC for the only Oklahoma opening of the award winning film, Life, Animated, on Friday, Aug. 19 at 7:30 pm at the Circle Cinema. Life, Animated is the inspirational story of Owen Suskind, a young man who was unable to speak as a child until he and his family discovered a unique way to communicate by immersing themselves in the world of classic Disney animated films. This emotional coming-of-age story follows Owen as he graduates to adulthood and takes his first steps toward independence. The film will show at the Circle Cinema from Aug. 19 -25.

Here is a link to the trailer. http://www.lifeanimateddoc.com/ 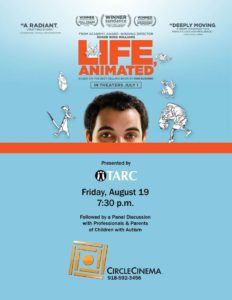