Mother’s Day was created by Anna Jarvis in 1905 and first celebrated in 1908. She wanted to honor her mother by continuing the work she started as a peace activist and to set aside a day to honor all mothers because she believed a mother is “the person who has done more for you than anyone in the world“.

To honor this Mother’s Day tradition, we want to share the stories of two incredible mothers who love their children with everything they have. Today we are highlighting Andee.

Andee Cooper’s life changed in September of 2011 when her three-year-old son, Kannon, began having his first of thousands of seizures. In a matter of weeks, Kannon was experiencing more than 110 seizures every day and tests soon diagnosed her once healthy son with epilepsy. Although many kids grow out of childhood onset epilepsy, Kannon’s hundreds of seizures per day began affecting his brain.

After two weeks at the Mayo Clinic, Kannon was diagnosed with Lennox Gastaut Syndrome, a complex, rare and severe childhood-onset form of epilepsy characterized by multiple and concurrent seizures and cognitive dysfunction typically extending into adulthood.

Immediately, Andee began a journey she never thought she would experience. She and her little boy who was already potty-trained, could count to twenty and sing the sweetest songs, were now facing a new future foreign from his first three years of life. 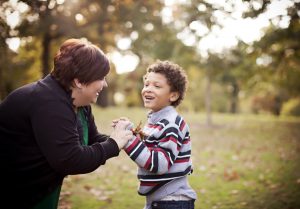 One of the first places Andee turned to for help was TARC. With consultation from Sherilyn Walton, TARC’s Family Support Coordinator, Andee received recommendations on school systems, therapies, sensory integration techniques and most importantly how to serve as an advocate for her son.

As Kannon started school, Andee worked with TARC to find resources so she could move to a new home in the Jenks School district with a school nurse on staff and a distinguished special education program. An on-site nurse is critical to Kannon’s care so he can receive his daily seizure medication or rescue medicine when needed. And when behavioral issues emerged, Sherilyn and Andee met with educators to find a solution.

Now a ten-year-old student in Jenks Public School’s Special Education Program, Kannon has been through more testing and has more battle wounds from seizures than one child should have to endure in a lifetime. With an IQ of 41, Kannon’s cognitive function is that of two-year-old, despite his physical appearance of a typical ten-year-old healthy boy.

“My son is often misunderstood because he looks healthy,” said Andee.

Andee has learned how to enroll in services that have helped ease the financial burden for her family, including providing services for Kannon with physical therapy; access to in-home services through a Medicaid waiver; and enrollment in SoonerCare which covers the medication Kannon needs to prevent seizures, an adaptive wheelchair, and some of her family’s monthly medical expenses. We are grateful that Andee reached out to our team at TARC and that she continues to work with us as she devotedly advocates for her son and others with disabilities.

As any parent, Andee will experience ups and downs and bumps along the way, but TARC’s Family Support Programs will be there to support Andee and Kannon long after his school years have ended.

As a single parent, an ally has been especially important for Andee and she credits Sherilyn and TARC for the progress she’s seen in her son as well as in her own professional career.

“I owe her everything—all of my positive outcomes and successes I have because of her help,” said Andee. “She has taught me how to be the voice for my child.”

While TARC did help Andee and will continue to do so, it was because of her initiative and advocacy that Kannon has the life he does today.

Andee is the mother that every child should have. She is wonderful in her advocacy and support of her child. That is how every parent should be. Every child should feel as loved as Kannon does. Thank you to all mothers out there!

If you have a story like Andee’s, share it with us and show everyone how spreading love can be life-changing.